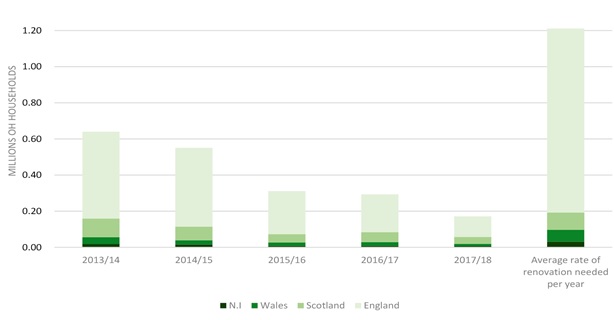 The building industry as a whole has a growing awareness of the ‘Performance Gap’. That is, when a building is designed, there is a targeted level of energy performance. Once a building is completed however, the reality is that these targets often are not achieved. The focus in our industry at the moment is on closing the gap between intended and actual energy performance, through a range of newly developed and emerging tools and policies, including but not limited to:

This focus on developing tools and polices that close the performance gap between the predicted performance and actual performance of new buildings is welcomed by our industry, and much needed as the UK’s requirement for new buildings grows over the coming years, in particular for dwellings. The government has a target to build 300,000 homes a year by the mid-2020s to house a growing population.

As Building Regulations, Local Authority Development Frameworks and modelling tools advance to address carbon emissions in new dwellings, there comes a growing risk of another performance gap emerging – that is the performance gap between carbon emissions in new dwellings to be built over the coming years, and the 29 million dwellings already occupied and consuming energy in the UK.

The UK has around 29 million homes with considerable potential to improve their energy efficiency. Homes account for just under 30% of energy use and around 20% of greenhouse gas emissions in the UK. It is one of the few sectors where emissions reductions have stalled over the last number of years. Huge amount of homes requires retrofitting are at a very low standard, earning the country the reputation of having some of the least efficient homes in Europe.

The Committee on Climate Change has stressed that widespread deployment of energy efficiency measures across the UK’s building stock will be crucial to any credible and cost-effective strategy to meeting net zero. This includes improvements to around 6 million cavity walls, 6 million solid walls and 21,000 loft insulation measures.

In addition to improving household incomes, energy efficiency is key to alleviating fuel poverty. Around 2.53 million households are in fuel poverty in England alone. Current fuel poverty targets are expected to be missed and when compared with 30 other European countries it was found that the UK has the sixth-worst long-term rate of excess winter deaths. Improving the energy efficiency of buildings plays a crucial role in tackling fuel poverty and will help bring down energy bills for the most vulnerable customers.

2: Existing Homes – What is being done?

The Government’s Clean Growth Strategy (2017) set new aspirations for energy efficiency and has a stated ambition for all homes to be EPC rated ‘C’ by 2035 where cost effective, affordable and practical.  The Parliamentary BEIS Committee’s inquiry into energy efficiency in 2019 heavily criticised the ambiguous language of “where practical, cost-effective and affordable” that it pinned to the EPC Band C targets as this language leaves the requirements open to too much interpretation.

This sounds quite promising, particularly as the scheme is broken into two levels of carbon-reducing measures – primary and secondary. With primary measures comprising of insulation, such as wall, floor, and lofts, and low carbon heating that includes heat pumps and solar thermal.

Since 1 April 2020, landlords can no longer let or continue to let properties covered by the MEES Regulations if they have an EPC rating below E, unless they have a valid exemption in place.

This is the market where the largest carbon savings can be made yet there are no incentives for this market to grow and very few local authorities have robust policy frameworks in place to address existing homes.

The Parliamentary ‘Environmental Audit Committee’ is currently holding an inquiry in to the ‘Energy Efficiency of Existing Homes’ As part of the inquiry, the Committee will follow up on the findings of the former BEIS Committee’s inquiry into energy efficiency, which concluded that major policy gaps still exist, and consider whether its recommendations have been implemented.

We recommend that the Government follows the advice of the Committee on Climate Change—and almost all stakeholders in the sector—to treat the energy efficiency of all buildings across the UK as a national infrastructure priority and implements the policies to reflect this.