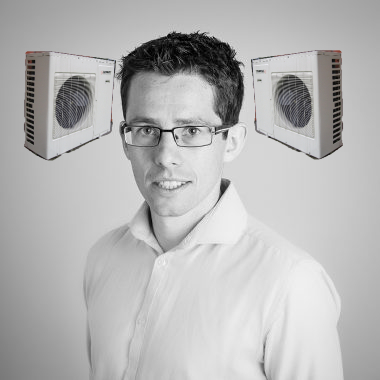 In January 2021, our Director of Building Services Ciaran Dorrity embarked on the installation of an Air Source Heat Pump in his three-bed family home in Bedfordshire as part of a wider project to refurbish and extend the property.

The system replaces a gas boiler to meet the home’s heating and hot water demands. Ciaran reflects on the benefits and constraints of the system, providing a real-world view of the challenges and practicalities encountered when installing the system.

What is a Heat Pump?

An Air Source Heat Pump is a low-carbon way of heating your home. They absorb heat from a cooler place and use it to increase the temperature inside your property.

Air source heat pumps look similar to air-conditioning units. Their size depends on how much heat they’ll need to generate for your home – quite simply the more heat needed, the bigger the heat pump will generally be.

How do they work?

An Air Source Heat Pump absorbs heat from the outside air into a liquid refrigerant at a low temperature. Using electricity, the pump compresses the liquid to increase its temperature. It then condenses back into a liquid to release its stored heat. Heat is then sent to your radiators or underfloor heating. The remainder can be stored in your hot water cylinder.

Why did you install it?

Air Source Heat Pumps are still relatively new to the UK, but I was sure that I wanted to install it in my home. Most of the projects we now work on are being specified with similar systems, and I wanted to understand first hand the implication of installing a system in an existing build.  My motivations were to ultimately reduce mine and my family’s carbon footprint, however I also hoped to reduce energy bills. The latter remains to be seen.

The UK was the first major country to pass a law requiring greenhouse gas emissions to be net-zero by 2050. It’s a legal requirement for us to hit this target, which is filtering through to the way we need to build new and retrofit existing buildings. Gas boilers form a significant part of the UK’s greenhouse gas emissions, representing 78% of the fuel still used for heating. The Government have subsequently made it a legal requirement that new gas boilers cannot be installed in homes after 2025 – this will be implemented through changes to the building regulations. There is a strong movement to electrify heat, however as the UK’s peak heating demand still outstrips our electrical supply by a factor of 4 in the coldest months, so the electrification of heat can only be achieved through very efficient systems.

Yes, in fact our current building regulations are based on carbon factors which promote gas systems over efficient electrical systems, but this is changing.

Whilst not all sectors of our economy have been able to keep pace with the radical decarbonization needed to meet our 2050 commitments, our electrical supply sector has shown significant progress. In fact, the latest projections shown that our electricity supply sector will be fully decarbonised by the early to mid-2030s. This has been achievable based on the move away from coal and combined cycle gas turbines (CCGT) towards strategic renewables, particularly offshore wind and ultimately new nuclear. As a result the electricity grid is becoming greener and the carbon associated with grid electricity is reducing.

As the carbon emissions associated with electricity changes, any electrically-led system will inevitably produce less carbon.

An Air Source Heat Pump has an external unit outside the house, however before we installed it we needed to make sure the property was well insulated. This reduces heat losses and ultimately makes our home more efficient. I installed a minimum of 150mm of insulation, which was applied to the inside of the wall before generally a second 50mm of foil insulation was applied over the top of this, then plasterboard and skim. I can’t emphasise how important it is to re-insulate your house if the opportunity exists. As we were doing a major renovation this was practical, although it may not always be possible or appropriate.

Because the heat pump produces lower temperatures than an equivalent gas boiler, it helps to combine the system with underfloor heating. This requires a series of pipework to be installed under the floor screed. There is also a requirement for more space than a conventional boiler. This includes the control systems and a cylinder. In general for a typical family house, you will need to have 2m² of space internally.

What are the key considerations for installing a Heat Pump?

So a few rules of thumb:

Higher heat source temperatures = better efficiency – So it is important to think about when you generate hot water. For example, in the summer run the heat pump during the day rather than at night.

So the most important thing, what does it cost?

Costs for any system are made up of:

I was lucky enough to apply for this at the time when the Renewable Heat Incentive was still available. This is coming to an end and therefore should not be relied upon for payback calculations if you are considering this now.

My example is based on:

Because my installation qualified for the RHI, the Life Cycle Cost comparison between my heat pump and the equivalent gas boilers is as follows:

The above is based on the cost of gas 3.5p/kWh, electric 16p/kWh and for the purpose of the simple cost analysis is assumed to remain static! This may not be realistic based on recent price hikes. Under my example, the heat pump is marginally favourable to a gas boiler for the first 7 years. However the RHI payments finish after 7 years, and after 15 years (a reasonable life expectancy of the equipment), the gas boiler is actually cheaper.

Without RHI payments the heat pump is simply not cheaper than the gas boiler.  The important thing to remember is that whilst we have installed a more efficient system, it needs to run for longer hours at lower temperatures, and consumes a more expensive fuel.

How about the Carbon Savings?

So if it’s going to cost money, what incentives are there to do it? The main benefit of the installation is the reduced carbon impact.  Based on 2020 national grid emissions factors, the system should save 25 tonnes of carbon over the equivalent gas boiler. In reality, this will only increase as the electricity grid decarbonises into the 2030’s.

So your final thoughts?

Firstly I’m extremely lucky to be in a position to afford the additional money required to pay for a system like this. I feel the carbon impact is very relevant, and much like the move to electric vehicles, it will take early adopters to prove that the technology is sound and provides all of the convenience and comforts of a traditional gas heating system.

My key takeaways are:

If we are to meet our carbon reduction targets and successfully retrofit our homes to be more efficient and use heat pump technology, it is vital for further stimulus to be provided by central government. Most people won’t be willing to switch from gas to heat pumps unless it will save them money and be straightforward. There is clearly more that needs to happen before this can become mainstream.

As CIBSE low carbon consultants and chartered building services engineers, Envision is well placed to advise you with your installation. Please do get in touch if you would like to discuss.